Spotted Wobbegong Shark
(Orectolobus maculatus)
There are several types of Wobbegong Shark in Sydney. The Spotted Wobbegong shark (Orectolobus maculatus) is seen quite often in Camp Cove and other dive sites. They are usually just under 2m in length, so not one of the biggest types. As with all sharks, they are mostly harmless but I do sometimes imagine that they are growling at you - I certainly would say that out of all the sharks in Sydney, these ones are the ones I fear the most because they appear so docile, yet can move like lightning when they want and turn full circle to bite their own tail. 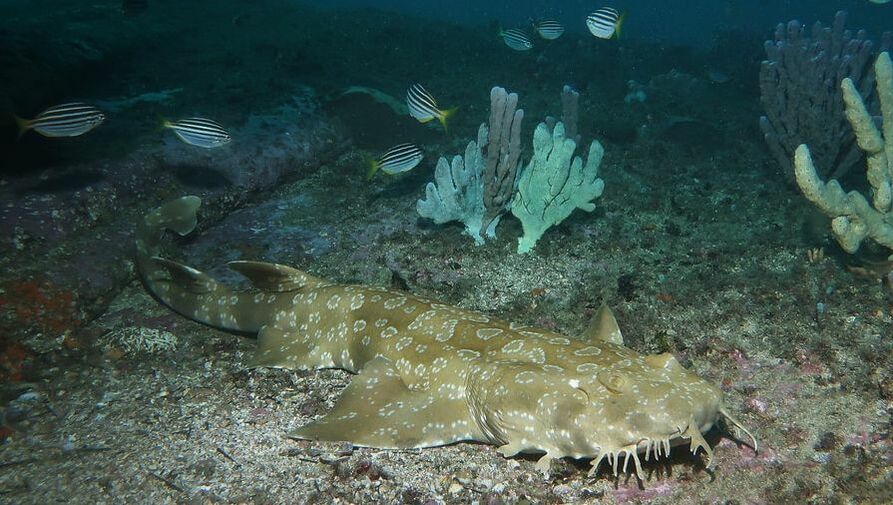 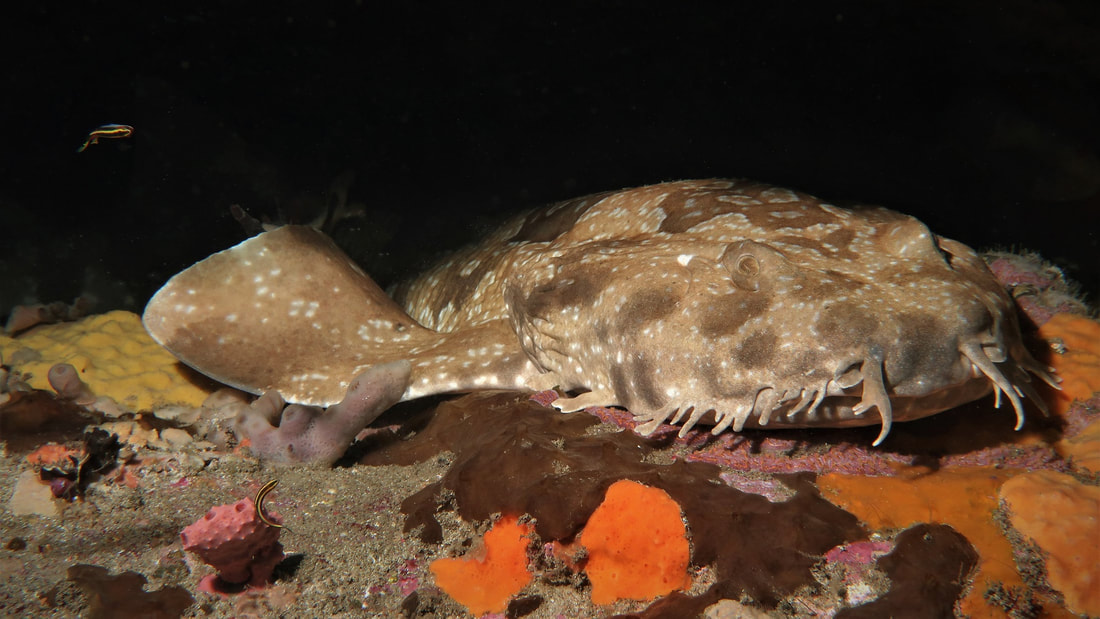 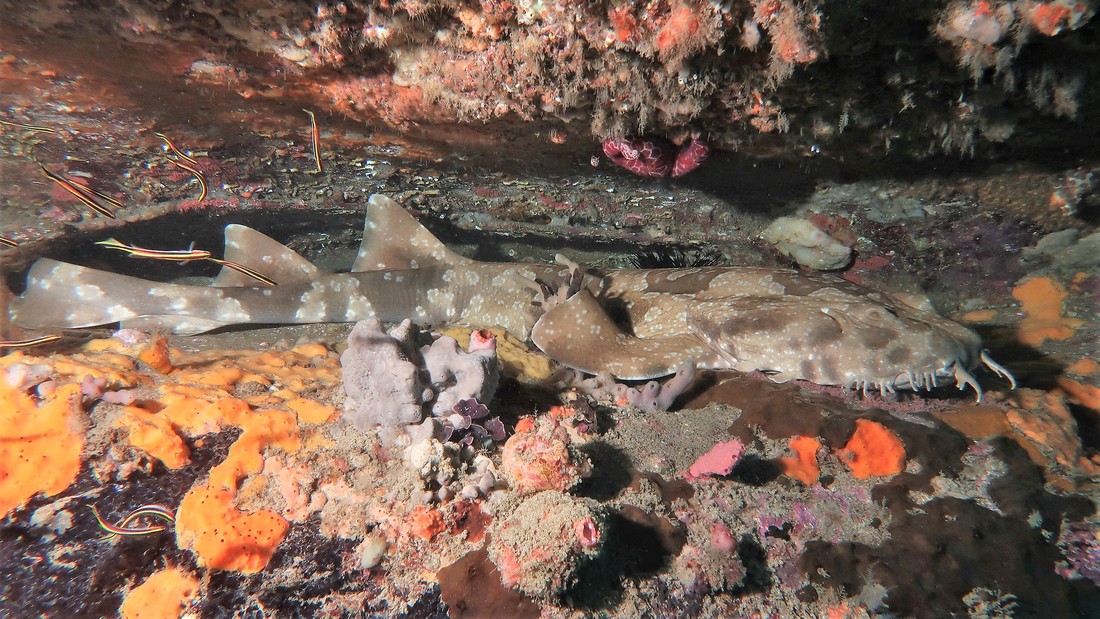 Breeding:
The spotted wobbegong shark can grow to 3.2m in length. Little is known about when they reach sexual maturity although they believe it is when the female is over 1.0m in length. She can have a litter of 20-30 pups and being Ovoviviparous she will carry the eggs within her body until they fully matured, at which point they will hatch from the egg capsules inside her uterus and will be born soon afterwards making her one of the few ‘live bearing’ fishes. The pictures shown in this page include 3 of a pregnant female seen in Camp Cove on a night dive during mid October and as you can see in the photos she looks ready to go. We named her Wilma since she is often seen with her male friend Fred. There is very little known about the Wobbegong sharks gestation period but it is believed to be around 10-11 months.

Danger to humans:
These sharks are mostly harmless, but they have been known to attack when provoked or if someone touches their tail. As with all sharks, be careful. These guys are beautiful but when you see that they can reach 3m in length and can swallow you whole you start to appreciate their power!
​Social Circles:
​Whilst it is not fully documented, in Sydney there are times when divers see both the Spotted Wobbegong and the Ornate Wobbegong socialising together, or socialising with Port Jackson Sharks. In the picture below the two species of Wobbegong shark were relaxing under an overhang at about 15m of depth and were sat face to face perfectly relaxed, as if they were two old friends catching up. The shark on the left is the Spotted Wobbegong and the shark on the right is the Ornate Wobbegong. 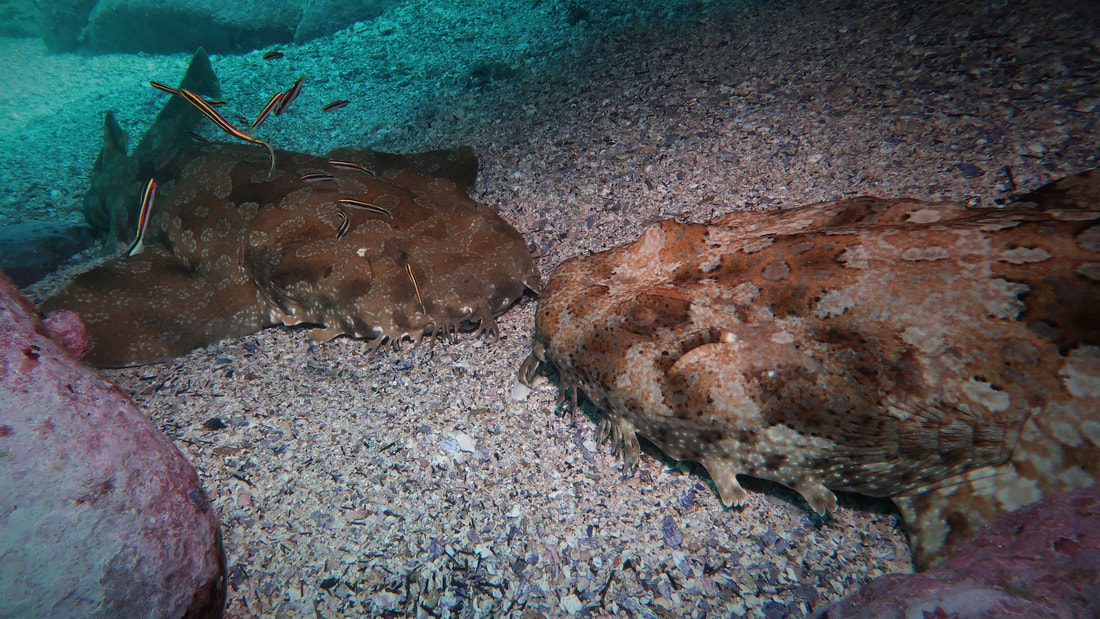